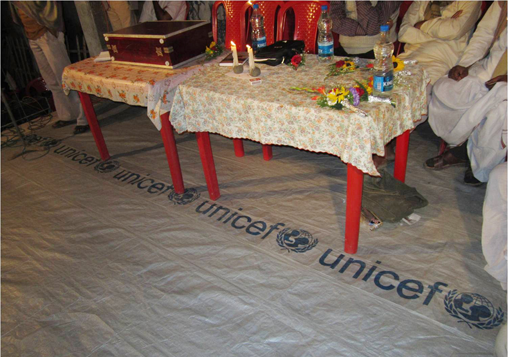 Tarpaulins of UNICEF and…..

Summer, 2012. The marks of devastations caused by Aila, which struck back in 2009, are still lurking everywhere around the Sundarban. Though people were able to make repairs in their houses and somehow manage, their agriculture took a huge toll. At many places, salt water from the sea has entered into the crop fields and got stuck there due to poor drainage — making the soil absolutely infertile for a couple of years. Ploughing and farming haven’t returned to the island, though three years have passed since Aila pulverized the region. Paddy seeds sowed on the fields filled with stagnant saline water are giving rise to saplings with anomalies. Roots of these saplings are not growing deep underneath the surface. Though salts have faded away from the primary layer, it is still present in the layers below.

It’s during this time that I received an invitation from Dayapur, a small village located in the remote island of Satjelia of Gosaba block. A local club from the area invited me to be a speaker at a conference whose agenda involves global warming and climate change. I had the responsibility to explain to a bunch of rustic fishermen how global warming and climate change are affecting the people of Sundarban. Now I always carried a strong distaste for the idea of having a conversation behind closed doors, in a very trivial, seminar-like manner — compiled with tedious facts and figures. But when I get an opportunity to talk and interact with simple rural folks, I never let that chance go waste!

Anyways, this isn’t the right place to talk about the ‘conference’……

Various sorts of music performances were done in that conference, along with a few lecture sessions. While sitting at the stage and listening to lectures given by other distinguished guests, I noticed a couple of tarpaulins lying below the wooden stage. At the middle of the tarpaulin, I could see the word ‘UNICEF’ written quite distinctly, along with its world-famous logo! Needless to say, I was quite surprised.

The next morning, a small discussion was going on over a cup of tea at a local tea joint. Gradually many localites started joining the discussion. Among them, a person came forward and after a few rounds of conversation, I get to know from him that he constructed the last night’s stage; he is the only decorator living in that village. Out of curiosity, I asked him where he found the tarpaulins with UNESCO emblem. It was time for me to be surprised again — he bought them for Rs. 200-250 apiece from the villagers. Yes, these tarpaulins were provided by the UNICEF team to the villagers who lost their homes to the cyclone. After two years, the degree of misfortune remained the same, but the value for such tarpaulins decreased. Season after season, without the lands being ploughed, there rose demand for cash money and crops. So, they were forced to sell these UNICEF-sponsored tarpaulins to the decorator for such a meagre amount.

Such an incident though looks insignificant at plain sight, speak of a crucial side of natural disaster-affected islands of the Sundarban; of the regions development curve. The spotlight on Sundarban falls only when the region faces any natural calamity. Then numerous NGOs and people come forward to help the unfortunate people of the islands and provide foods, monetary assistance, etc. After a few days, the interest of the general public and these organizations slowly fades away. Even the nature of demand of the villagers change over time; people who could take care of such demands and solve their issues slowly disappear with time as well.

Just a few of months ago, super cyclone Amphan went through the islands of the Sundarban, destroying almost everything that came across its path. The overall volume of relief commodities sent to the Sundarban is quite larger than that of previous times. Rice, pulses, soya beans, clothes, medicines, sanitary napkins, etc. were included in this relief program.

But after three months since that incident, do you think the demands of every person who was badly affected by that disaster, got fulfilled? It is very hard to trace even a few individual or organization, barring one or two, who keep a track of such demands regularly. If we investigate meticulously, we will find that most of the earthen houses which were demolished by the wind have been erected again in the same fashion, without proper support to withstand severe winds.

The region is waiting anxiously for another massive-scale calamity and post-destruction reliefs. If we don’t consider thinking of any long-term development, the end result of all the reliefs, all the aids sent to the people here would ultimately be like the tarpaulins of UNICEF — misused and squandered.